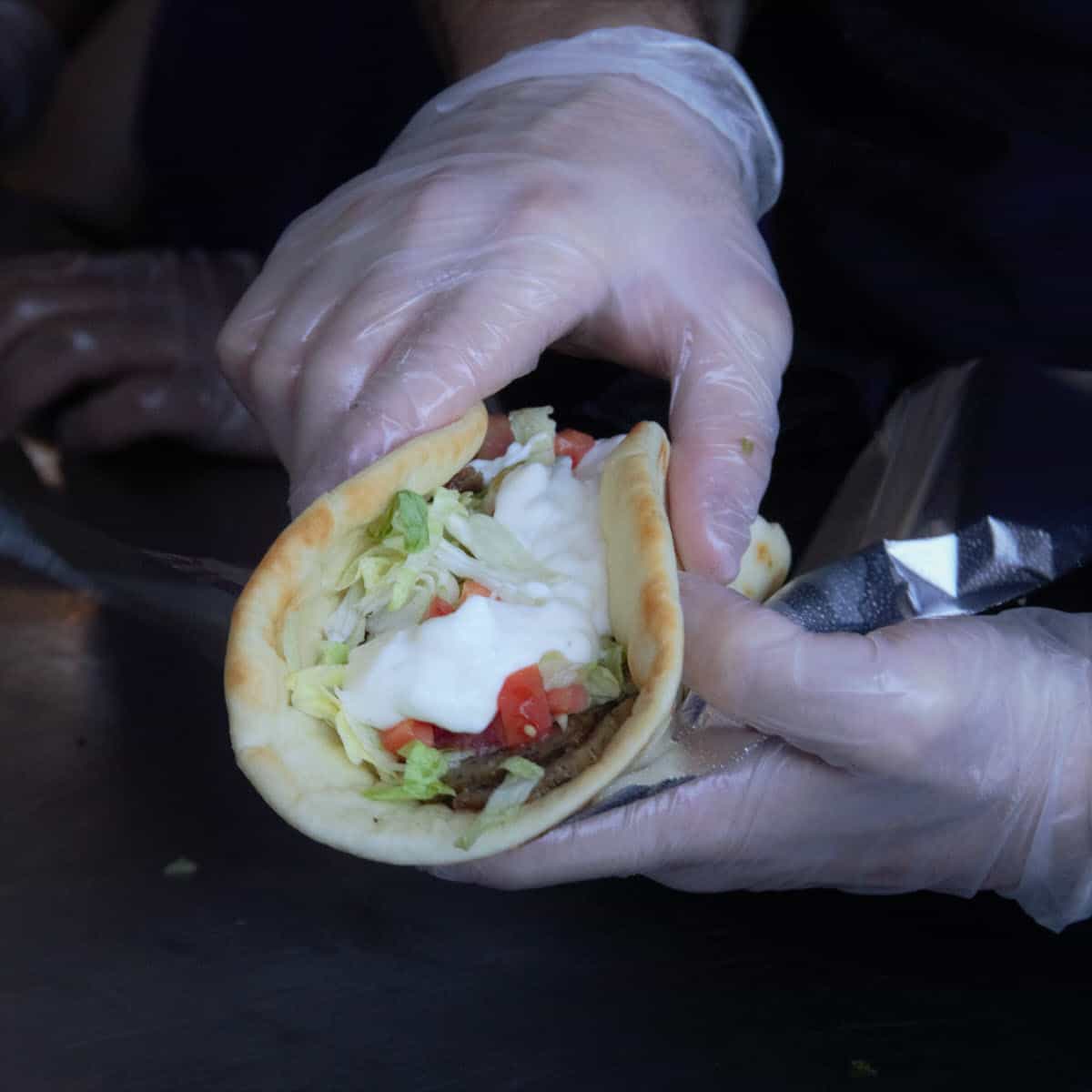 We all love some good takeout, but did you know that they are often an easy option to make while camping?

Often looking for inspiration for what to cook on the next camping trip it wonders to recent takeout foods and ones that I like to buy. They frequently are easy to make and are ones that are craved rather than the regular home-cooked foods.

This selection of 10 recipes is all great options to cook and eat while camping. Serve them as they do for takeout and you can save on dishes too.

This traditional recipe originated in the early 20’s in Phillidelfia originally was just thinly sliced beef, onion, and cheap American-style cheese in a bread roll. The modern versions include additional ingredients like bell pepper and fancy cheese.

When camping this is easily made on a flat top grill, griddle, or in a skillet. Once made it can be wrapped in paper to serve. 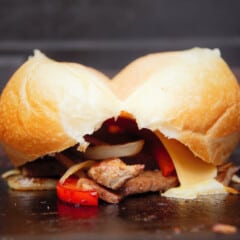 Griddle Philly Cheesesteak Recipe
Philly cheesesteak is super tasty and a great lunch option for the BBQ, especially when camping. Marinated steak, veggies, and cheese are served in a roll. This is my version of the…

It is weird to see the term Bacon and Egg Muffin without the ‘Mc Muffin’ element that has made it famous as a breakfast takeout option.

They are actually quite easy to make camping on a flat top BBQ, griddle, or in a skillet. The muffins due to their density travel better than bread, also a positive for camping. 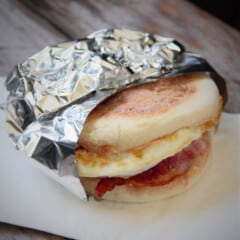 Bacon and Egg Muffin Recipe
Fast food has the right idea with some of their quick and easy breakfasts. The bacon and egg muffin is a great example of one of these. Layers of egg, bacon, and…

Cooked in a skillet normal at fairs funnel cakes are an easy recipe for the camping environment. The skillet can be heated on any gas stove or over the campfire.

The strawberries on top can be fresh or if away for a while the canned ones work really well too, these are also what most fairs use anyway due to the large volumes they are cooking. 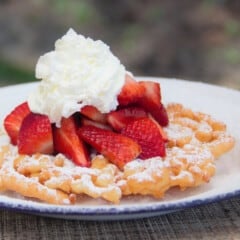 Everyone loves pizza so it makes sense that there is a range of ways to make them while camping, this version uses an upsidedown Dutch oven. 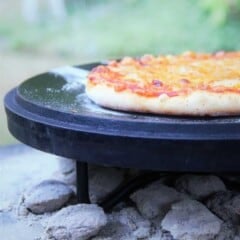 A flat-top BBQ is the ideal camping tool to make large servings of fried rice, but it works just as well with a griddle, skillet, or in a wok. (One pot cooking reaches a new level when camping with a wok).

There is a wide range of fried rice flavor profiles that can be cooked based on your personal tastes. The ingredients can range from fresh to canned, and even frozen if you are in a travel trailer or RV. 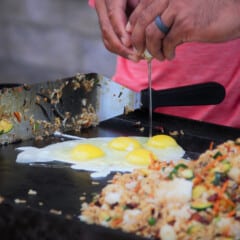 Griddle Fried Rice Recipe
Cooking for a crowd can be made easy with a flat top grill which is ideal for making large portions like this griddle fried rice. The rice gets a smokey quality from…

Dutch ovens are surprisingly good for deep frying which opens up a wide range of food that you can cook including donuts.

The recipe is relatively easy to make using a dough technique and cutting the donut shape out rather than the batter method. Once made they can be glazed to finish and sprinkles added to the top. Alternatively while hot they can be sprinkled with cinnamon sugar and eaten hot. 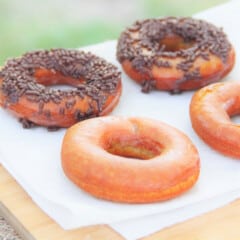 Dutch Oven Glazed Donuts Recipe
Even outdoors you can enjoy wonderful snacks like these Dutch oven glazed donuts which are a perfect treat around the campfire. You can have them for breakfast, as a midday snack, or…

The technique of making smash burgers is much easier than some of the other formed variations making it ideal for camping.

Once the burger is made you can create the simple style in the recipe with cheese or add more elaborate toppings like lettuce, tomatoes, pickles, and similar. 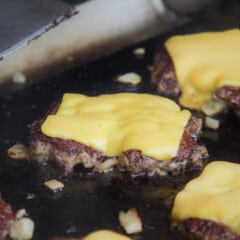 Cheesy Smash Burger Recipe
A Smash Burger is a ground beef patty that is smashed (squashed) after it’s placed on the grill. Not so pretty, but who needs pretty when something tastes so good? These burgers…

Variations of these tacos have become a cliche of camp cooking. The ease of serving into a bag of chips is highly appealing.

Once the chips are topped with the sauce, it is just a matter of adding your favorite toppings like cheese, lettuce, sour cream, guacamole, and similar. 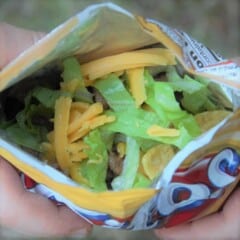 Taco in a Bag Recipe
Perfect for hearty single servings while camping, this recipe for tacos in a bag is a popular meal among children and parents that don’t like doing dishes. The concept is simple: an…

Commonly sold in Mexico this is a variation of ‘Elote’ their street corn. It can easily be cooked in the coals of the campfire.

It makes a wonderful side dish or a light meal as it is often eaten at fairs and similar. Feel free to alter the seasoning to meet your heat preference. 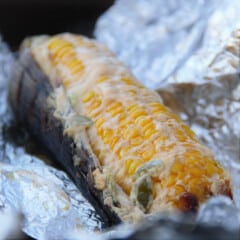 Mexican Street Corn Recipe
This Mexican street corn is sweet, savory, and spicy. Not only is it delicious, but it is super fun to eat. It gets its name from being a popular food sold in…

Chicken wings are such a popular takeout food there are multiple food chains that are now selling them.

This is a simple variation that can be cooked on a basic grill, one that you bring or the ones located on most campsites. Korean seasonings are the prominent flavor of this recipe but there is a wide range of flavor options available. 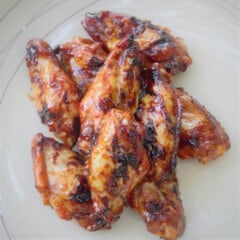 Grilled Korean Barbecue Wings Recipe
Kick up your next game-day barbecue with grilled Korean barbecue wings. Sweet, spicy, and irresistible, your friends will love snacking on these while the game is on the TV or happening on… 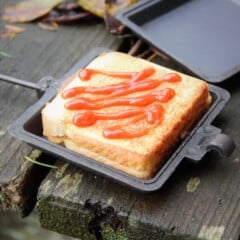 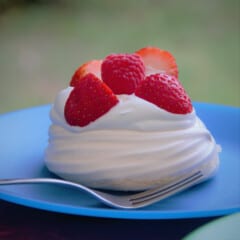 10 Australian Baking Recipes for the Outdoors 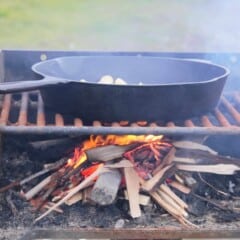 10 Recipes for Beginners Cooking Over a Campfire 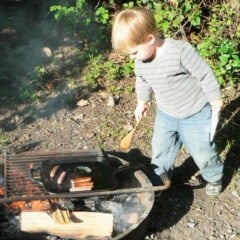 10 Easy Recipes to Cook with Kids While Camping